The Notebook as Database: John Locke, Commonplacing, and Hash Functions

A couple of months ago I stumbled by happy accident onto the topic of keeping a commonplace book, or commonplacing. While this did call up vague memories of reading about commonplace books in my earlier life as a Humanities student, I had fully appreciated neither its power as a tool for memory and worldview-organization nor (and more to the point here) its kinship with a host of techniques used today for organizing large bodies of data.

If you are not familiar with the reading practices of the Renaissance and the early modern periods, a commonplace book is essentially a notebook, kept by habitual readers, for hand-copying quotations from their reading. Such quotations are entered under headings -- the "common places" (the word comes from locis communis in Latin, or topos koinos in Greek, and the technique descends from the copybooks used in studying those languages) -- that in Renaissance/Enlightenment practice were governed in part by the worldview of the day. Later on, as literacy spread to greater populations, the practice morphed toward something more like the modern scrapbook.

This is a rich and varied topic; much has been written about commonplacing as a technique for interacting with one's reading and, as I suggested above, organizing a worldview within a cultural context. As introduced by William H. Sherman:

Renaissance readers, writers, and speakers were well-trained in textual recycling, and one of their most powerful and pervasive tools was the ‘commonplace book’ - a collection of notes from reading and other sources that the compiler might want to recall, and reuse, at a later date. While the structure and purpose of these volumes varied enormously, they were distinguished from random collections of quotations (in theory, at least) by being gathered under conventional headings called loci communes or ‘common places’. As Ann Moss has explained, "The more elementary commonplace-books ... would be divided into sections under heads listing the main virtues and vices, and all their subsidiary manifestations. More advanced commonplace-books might have ambitious programmes for covering all knowledge, or they might be specialist repertories of excerpts relevant to specific disciplines" (Printed Commonplace-Books and the Structuring of Renaissance Thought, Oxford: Clarendon Press, 1996, v). The headings could be tailored to an individual’s personal or professional needs, suggested by teachers, or bought in blank-books with printed headings and decorative borders - and readers who did not have the patience or the resources to gather their own entries could even buy a book with the quotations already printed or written in. [source]

Here are some other quotations about commonplace books -- a web search will turn up much more if you're interested in the historical context and practice. The noteworthy part for me here is the notion that the technique was a practice -- a technology -- related to memory, an early-modern ars memorativa, even. The "commonplacer" keeps notes for later review and use, whether to deploy in one's own writing (in a day when authoritative quotation had a completely different quality and import than it has today) or for organizing one's personal reception and perception of significant ideas, also to be reviewed when musing on one's development.

This practice grew in the early days of print media and (more) widespread literacy, when the proliferation of text would have been as daunting as it was exciting to an avid reader (of course, cf. parallels with today's networked explosion of content and its attendant meta- and big data). Agile readers used whatever methods they might devise or find available to keep track and make sense of their reading amid this proliferation of text and idea, in hopes that they could dredge it up when the reference was needed, and possibly even keep their heads above water in making personal sense out of so much information.

Essentially, it was a technique for cataloging information that has made a personal impression.

All of this sort of caught my imagination because when I learned about how and why commonplace books were kept, I kept thinking of the whole thing as like a "manual database" for personal reading.

With that in mind, I learned that the practice of commonplacing was stoked when, in 1685, Enlightenment thinker John Locke published a method he had devised for organizing entries in his own commonplace books. Essentially, he added a technique of indexing to the cataloging that was already inherent in commonplacing technique. But because a commonplace book is (a) a physical book, and (b) essentially a work-in-progress, its headings chosen on the fly as one cleaves headlong through a sea of text, preparing one's commonplace notebook presented a challenge -- one didn't know in advance precisely what ideas would be making an impression, and thus what headings would be needed, without taking a shot in the dark. Some did try -- presuming that their copying would fit into a religiously or philosophically determined rubric. There is more interesting history here, but I'll not delve into it.

Locke's method cinched my comparison with a database: he basically invented a rudimentary hash function, and put a hash table in the front matter of his notebook. Et voilà, the notebook as database!

I'm not familiar enough with the history of cataloging or information and organization to know if this had any direct precursors or cousins in contemporary practice, but I've been on the lookout for similar organizational practices, or other ideas that prefigured the modern hash function in the predigital world. Let me know if you know of anything.

Locke's method is described in some detail here with quotations from Locke himself. See also this facsimile and transcription of the book where his method was originally published. I'm calling the hashing part of his method the Lockean hash, and in short, this is how it works:

Given a commonplace heading (Locke calls it a Head, and his example is 'Epistle'),

Other cases are not covered, and because this isn't a comprehensive algorithm for an automated system, that would not cause much difficulty in the overall use case. The main exception I can think of -- a word with all consonants -- would probably never have been encountered (this was before the ubiquity of acronyms, after all). Many people would probably have organized their notes under Latin headings, too (Locke specifically recommends keeping it to one language, an amusing hint at the kind of organizational challenges his scholarly contemporaries faced). Notably, y-as-a-vowel is not handled.

But here we are, with a number of "hash buckets" equal to the number of word-initial letters used, times five vowels.

For Locke's own notebook (in part because orthography was just different, and possibly Latin, in those days) he omitted/merged a few initials -- J and I, for instance, share a bucket in his system -- bringing the number of potential initials down to 20. This enabled Locke to construct a convenient 4X5 grid of initial letters which, when folded with the 5 vowels, rendered a 100-slot hash space. Locke describes using black and red lead to draw the resulting table in the beginning of his notebook which, along with a few additional techniques for pagination and pageflow, would serve as its index, much as a hash table does in database or other software. (Note that this page is from a printed book explaining and illustrating how he did it, whereas the technique itself was a manual one.)

When a heading is added to the notebook to accommodate new quotations or notes, it would be hashed (mentally) and the page number of the copy would be added to the corresponding slot in the hash table. Before creating a new heading, Locke would consult his index to see if he had already begun an page under that hash, and if so the copy would go there instead. Upon filling a spread, Locke would continue copying not on the next page (which might already have content), but on the next blank spread, adding references to the new page number to the bottom of the just-filled page and to the front-matter index. By allowing headings to leapfrog each other, this method both minimizes page waste and tends to keep newer and more active material closer the last-filled pages of the book.

Analysis of the Hash Function

I discovered and researched all of this with consideration of making a commonplace book for my own use, and I wondered if Locke's method would work for me as effectively as it did for many in the 18th century.

Granted, by standards of today's usage of hash functions, Locke's is beyond rudimentary. It has a grossly nonuniform distribution (being lashed to natural-language letter frequencies), and is thus riddled with the likelihood of collisions (see further analysis below). But it has an interesting property that no passable modern hash has (or needs): it is intuitive. That is to say, Locke (or anyone who used a similar method) might run across an interesting idea about algorithms, and think "Hmm, Algorithms... A... (l... g...) o..." and immediately look up all the pages in his notebook where he or she might have copied or taken notes under Algorithms. Certainly, those entries might be interspersed with entries about Arrows, Atomism, Astronomy, and any other headings that hash to Ao, but barring a terribly unlucky distribution of headwords, this does not seem like a major issue for a notebook-sized repository. It may even be considered a feature, if maintaining a commonplace book is also seen as an opportunity to make unexpected connections or explore and reflect on one's passage through reading.

To get a sense of how bad Locke's hash distribution really is, I wrote some code to hash an input list of words and keep track of the hash table for some simple analysis. I then fed it a list of the 10,000 most commonly used words per Google n-grams -- which is admittedly probably not representative of words likely to end up as headings in someone's commonplace book.

Here's a histogram of the distribution (made using bitly's sweet little data_hacks commandline tools), with the 100 slots divided into 20 bins:

This is clearly nowhere near a uniform distribution. Here's a bar graph showing where the headings land in the hash table (the hashes are plotted in alphabetical order): 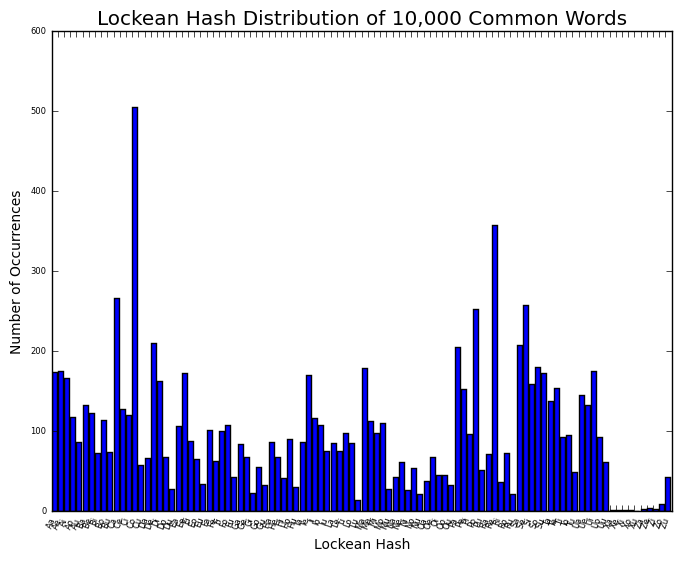 It's hard to see the tick labels in that image, but the Co and Re hashes are by far the most used (this also accounts for the long tail on the histogram above). Significant showings are also made by Se, Ca, and Po (with more the 250 occurrences apiece), followed by De, Pa and Sa (with over 200 occurrences). Notice also that several of the X and Z hashes have fewer than 5 occurrences -- not a huge surprise for English words. Zu gets some love, but that's because Z is merged with Q, so all the Qu-words land in that bucket.

A few ideas, none of them new, to take away from all this exploration:

In a future post I hope to present a bit more analysis and exploration of Locke's function, offer some tweaks to improve its distribution, and reflect on my own experience with a commonplace book. I'll also try to clean up my hash-analysis code to share. Until then, agile reading!